We make it to Beaufort, NC and weather reports give us a great window to head south off the coast "but"!!! Yes, there is always a "but" when you are planning a trip on a boat

This but involves our inverter.  We have two and before departing Massachusetts we were told one of our inverters was "junk".    We could have postponed and replaced the "junk" inverter but decided to go with the second inverter.  As we traveled further south we realized the second inverter just wasn't doing it's job.  Constant care had to be given as to not drain our brand new batteries.

As luck would have it.  Yes,  we did have a little luck on our side.  We had met a mechanic on our trip south in 2016 that was amazingly talented. His name is Brooks Heyland  (252) 732-0377.  I think this guy can repair almost anything.  Well one look at our "junk" inverter and lo and behold he had it running in 10 minutes.  I thank god I didn't believe the first guys opinion and left the Mastervolt in it's place.

"But", yes another but Brooks found that our alternator on our generator was not producing 100 percent. So we had to order a new Alternator.  Luck was not with us, it would have to have it sent next day air.  Holding us up another day.

As I said before I do not enjoy travel inside the inter coastal.  Holding up another day put our window weather in jeopardy..  This was weighing heavily on my mind.  Not only do I dislike the tedious of travel down the inter coastal, out boat draws 5.5 feet of water and many area's south of North Carolina have many area's of shoaling.  Our trip in 2016 was a learning lesson in traveling in shallow waters and traveling by inlets where there was a great amount of shoaling with no correction markers by the Coast Guard.  Thank Goodness we were not one of the boats aground upon one of the many shoals.
I decided if the weather window closed I would wait it out.  That's how much I wanted to avoid inside travel. 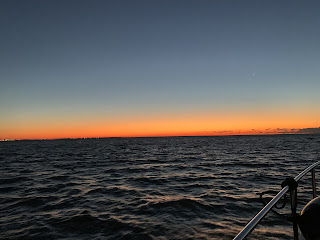 Early start today.  Finally have a good window for the trip to Norfolk.  It is an absolutely clear day with not much in terms of chop.  As we approach the shore off of Atlantic City we spot this strange barge headed North.


Not sure what it is and the guesses from family and friends have been quite amusing.  What’s your guess???

The sunsets once again and we keep our eyes on the radar and closely monitor all the workings of the Java.  There’s moonlight tonight giving us a little light off the ocean.

Another sunrise and we are nearing Virginia.   Our ETA to Waterside Marina in Norfolk is 3:30pm.   Looking forward to putting my feet on solid ground and taking a walk before the sun goes down once again.