Back in the water

January 20, 2019
We we’re finally launched again after all the Christmas festivities at home, the New Year and of course our granddaughter Lilly’s 7th Birthday!!  American Custom Yachts did all the work on the cracked housing the shaft and had the prop reconditioned.  Work that hadn’t been done in awhile if the logs are to be true.  If I had foresight I should have had the boat compounded but that will have to wait till.

We departed American Custom Yachts on the Saint Lucie River on Friday January 18, 2019.  The River does not have much of a depth so with full fuel tanks and a stocked boat we made sure we left just prior to high tide so that we could make it out the east end of the River into the crossroads and out the St. Lucie Inlet.  Which despite what I had read had plenty of water in it at a tad less than high tide.  With the speed or maybe lack of it the whole trip down and out of St. Lucie took us over 2 hours.

We headed south with thoughts of Key West dancing in our heads.  We had an amazing weather window but knew if we didn’t make the run in the next 24 hours the weather was going to deteriorate quickly.  Seas were calm but there were many boats out and about in the Atlantic.  Maybe the long weekend??

Right at Sunset we passed Miami and were treated to an amazing sunset. 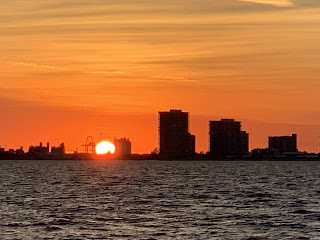 There were an amazing amount of Friday Night fishing boats just past Miami.  Keeping a close eye on the radar we cautiously continued south.  We were passed by cruise ships off to the east of us during the night and we steered clear of the many reefs that surround the Florida Keys.  The night was so clear we could see the headlights moving up and down the overseas highway.  As the sun rose the wind had picked up a bit and we had a small chop but weather reports were forecasting winds 25-30 mph that night.  We arrived in Key West approx.  at  2pm. Seeing we hadn’t really planned our trip that far ahead we attempted to anchor for the night but if any of you know Key West Harbor you know a 50 foot Nordhvn is a tough boat to anchor in that harbor with perfect weather.  We spent the night constantly watching the anchor monitor.  Had we really thought ahead we should have went around into the mooring field before the wind came up.  The mooring balls in Key West Only have an eye on them so trying to grab one, put a line through from the height of a Nordhvn is tricky but when the wind is blowing 25-30 I would say for us impossible.  Also, a little thing I forgot to mention was our thrusters were not working.  More on that later.

Thankfully, we called Steve(great dock master) at Key West Bight Marina moved some boats around and found a nice slip for us that was very dockable even without use of our  thrusters in the wind.  It pays to acquaint yourself  with each dock master as you travel because on return trips even without a reservation they do try to fit you in. That’s my experience at least.  So we were tied down safe and sound and the wind was blowing pretty hard and the skies had opened  up with lightening and torrential rain.

First thing to do was to catch a little sleep. Seeing that it took about 30 hours to travel from the marina on the St. Lucie River to Key West.  With two of us operating the boat we usually take 3 hour watches except during the night where i’ll Take 4 hour watches to give The Captain extra rest.

Now, back to those thrusters.  Checked the switch on the side of the master bed( that’a Where the switch is located on the N50 and it was in the right position.  Next we checked the connection to the battery and there is where our problem was.  Over use of the thrusters will cause your connection to overheat. Luckily it was a quick fix with replacing the clamp attaching the wire to the battery.  I know  I don’t have all the exact  names of every part but I am learning each and everyday.  Once I put my feet on the ground I headed over to Key West Marine Hardware to purchase a few more back up clamps..  Less expensive that West Marine for small parts like light bulbs and battery connectors!!

January 10, 2019
Well the repairs seem to be completed on the Java and our youngest is ready to embark on his first seaterm at Massachusetts Maritime Academy.  While he will be traveling to the sounther part of the Caribbean we will venture first to Key West with a rendezvous planned in Miami with my son’s ship.

All the provisions needed from home have been sent ahead to the boat.  Monday can’t come quick enough!!!!
Read more 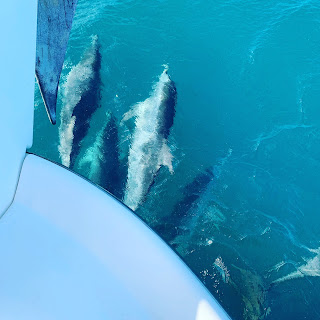 We finally are on our last leg of our journey south!!! Departing Beaufort at 1600 hours. The weather forecast is for calm seas for the next three days.
Our course gives us an ETA of 1400 hours to Fort Pierce Inlet.  We start our watch schedule with 3 of us taking 4 hour watches.  The first night was very uneventful but God  am I happy i’m Out on the wide open sea.  I love the feeling of cruising out there.  I read once :Consciousness is like a vast infinite ocean of peace and stillness that underlies everything in existence.  The feeling I get when I’m at watch and the vast ocean is around me astounds me.  It just gives you such a feeling of peacefulness.  The wide open sea reminds you of those who had sailed these seas for hundreds of years.  Just the enormity of what is in front of me.  I learned to love the sea early in my life.  My father passed his love of the sea onto me. He served in the Navy in World War 2 and though he n…
Read more