Believe it or Not We are Homesick 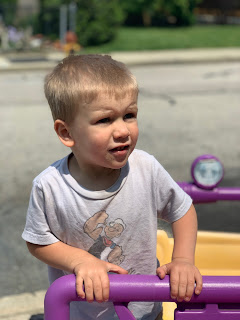 It is a beautiful sunny day in Marathon, FL.  All is peaceful and quiet.  Then we get a phone call.
It's a FaceTime call from our youngest grandson, Nicholas.  Nicholas just loves his Papa.  Even
though he can't say many words he clearly can say Papa and Hello.  He grabs the phone every time
we speak with him.  But this call was different.  Nicholas has a twin, Alaina.   They are 2 years
old.  This call made us think of how these little two loves are changing and we just wanted to
be there then and now!!
So after the phone call we started planning our trip back up the East Coast to our home port
of New Bedford, MA.

It was a very uneventful trip North.  We took the outside route until the weather started to look like it was going “south” so we headed in at Winyah Bay.   It is North of McClellanville SC so we missed a lot of the shallow area’s of the ICW. We had never tried this inlet but it is a large inlet and if we just wanted to tuck in for the night it would have been a perfect place to anchor.   It is a place I will remember for future trips North and South.  From the inlet we headed to Waccamaw River and the Wacca Wache Marina.  A small place with a nice face dock.  We tied up and headed in for a good meal and a few cocktails.  We had just come from 4 days of going 24/7 in the Atlantic.   Something I like to do if we have the weather.  I know people say “slow down, enjoy the scenery but at this point I just wanted to get home.”

The next day was a slow day seeing we were in the ICW and from Wacca Wache north the water is quite skinny.   After bumping a few times while we were in the channel we arrived at Southport, NC. We were planning on stopping there as I have a cousin that lives on Oak Island that I hadn’t seen in 20 years.  It was great to be able to catch up with family that I hadn’t seen in years.  The wind really picked up that night so we decided to stay put for an extra day of family time.

From Southport, NC. It was another long day of careful cruising in skinny water.  We decided to just anchor right off of Beaufort, NC.

I have a great mechanic I always use in Beaufort, NC.  I make a list during the winter of repairs we are unable to do ourselves and Brooks always takes care of us.  This year it was the engine alternator that needed a new power regulator.  Luckily we had him check things out because we found a broken engine mount on the generator and also as we were starting the engine up after the repairs we found the fuel injector pump on the generator needed to be replaced.   Things we usually wouldn’t take on ourselves.

So after a two day stay it was off and heading north in the ICW.  We really wanted to make up time so we pushed hard and just made it through the Alligator River Bridge.  The weather was getting nasty again so we really wanted to get through the bridge.  Luckily we did because it was closed for 2 days after we went through.  We anchored for the night and woke up to some good swells in the Albermare Sound.  If you’ve ever been through there you know it doesn’t take much to make that a nasty trip.  After a rough hour we were in the lee and things calmed down.  We pushed on and stopped at the Great Bridge, VA. We tied up for the night and had a very enjoyable evening with a few couples we met at the dock.

The next day our plan was to make it to Newport News for the lowest priced diesel we found on the east coast.  Papco Fuel’s diesel was only $2,27.   A lot less than the 2.80 I had seen anywhere else.  Plus they let us spend the night at their dock so we could get an early start out of Norfolk in the AM.

Another 3 1/2 days straight out and we were pulling into New Bedford, MA harbor, our home port.  We quickly docked and were met at the dock by our youngest son.  We hadn’t seen him since his Maritime Academy’s ship was in Miami back in February.

So after 2 weeks cruising(and 5 months away) we slept in our house, on land in our own beds.

The next day our first stop was to see those two little faces we had missed so much.   Nothing can compare to the smiles on their faces and being called Grandma and Papa face to face after 5 months.

Time on the Hook 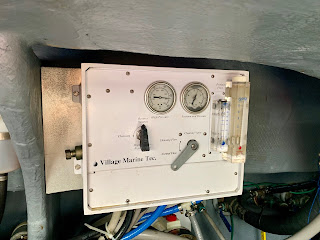 It was a hard decision but instead of heading to the Bahamas this year we decide to hang back and get some work done on the boat.  It’s always a work I progress if you ask me.  When the boat was hauled we thought we had everything in tip top shape but as we traveled down the coast from Boston to Key West we had a few problems with a couple systems.


First issue was our Village Watermaker.  We have owned the boat for 3 years and never used it.  We had ordered all the necessary parts but just never installed them or installed them.  So we had a new main filter and 3 membranes.  The major problem was neither of us had ever used a watermaker and had no idea how to set it up or how to use it.  Thank Gof for Captain Don McCarty. With his help I was able to get the necessary missing hoses that should be attached at the end of each membrane for the product water to flow into the tanks. I had to also replace the hose coming from the high pressure pump to the first membrane.  That had to be mad…
Read more